My son continues to impress me each & every day, but last Monday was even more so as I saw him through other people’s eyes. I didn’t want to deal with the crowds camping over the holiday weekend, but I had an itch for a view. So I settled for a hike, but in my way of scattershot planning, picked one that was harder than I expected. The world’s longest suffering boyfriend headed back to the car after 2 miles of upward, slightly buggy heat, but the kiddo stuck with me even when we gave him every out possible. 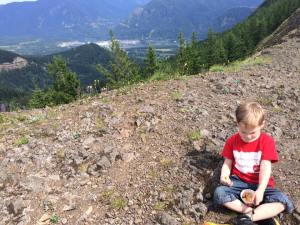 And boy, did that kid kick ass. We headed up to the saddle near the summit of Mount Hamilton (we didn’t head to the summit as Kade is only 5, & that’s a steep cliff to sidle along). This is on the Washington side of the Columbia River Gorge, which took us 9 miles, 2000 feet elevation gain & loss in less than five hours. Being in the brilliantly green, growing woods we can focus inwards and outwards at once, covering such topics as finding the best stick, what airplane is flying above (Tom would know), why Mommy goes to her boring job everyday, & the somewhat incomprehensible to anyone over the age of 8 games he plays at school with his friends. Kade earned his giant bowl of chocolate ice cream with whip cream & a cherry on top a million times over (we started naming what we wanted when we reached the car on the way down; ice cream, always ice cream).

So far this season we’ve done four major hikes together, but this one we didn’t start until later in the day & was by far the hardest I’ve ever asked him to do. Kade only faltered at the end, when the ice cream the boyfriend had grabbed for us in Stevenson had melted because it took us so long to get down (this was solved by a quick stop at the thank you a zillion times for being open on a Federal holiday Baskin Robbins!) I only carried him for about 50 feet, & he hiked the rest with me, hauling his little Deuter pack of snacks & a change of shoes. While we were on the saddle, taking pictures & stuffing said snacks down our gullets, a few very nice gentlemen offered to take one of my current favorite pictures of the both of us. They kept mentioning how big a deal it was that this little kid made it all the way up here, all by himself (well, with some hand holding & much encouragement from the mommy lady).

I’ve been hiking ever since my parents first kicked me out for a summer at a camp in California when I was ten (or was it eleven?), & hated it for a good long while. Oh, I loved the arriving somewhere, but the whole hauling things upwards I didn’t cherish (this is why we have draft animals people!) It’s only since Kade came along that I’ve learned to love it, even when I don’t stop to think how big a deal it is to other people to see a little kid hiking like he does.

We get so distracted in our daily lives trying to juggle the day job, the hobbies, the household, the cruddy adulting stuff that I push the hiking & camping as a way to focus just on this golden kid. He’s growing up & forming & becoming himself right before my eyes. He wrote his full name for the first time without help last week! 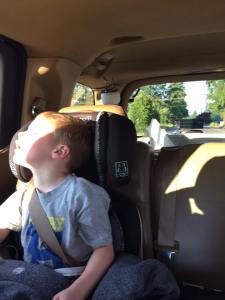 Choosing a trip to do, pouring over the maps, loading up & heading out gets us just that, out where we can both loosen up & just enjoy being together. At this point it seems likely I’m only going to do this kid thing once, & while I make plenty of questionable decisions & struggle to pay enough attention, getting outdoors with Kade is my way of being the best parent to the best kid, if only for a weekend & the price of a campsite & a tank of gas.

I keep wondering what he’ll remember, what the highlights of his childhood will be when he’s my age & older, & I know it won’t be the busy afternoons holed up inside with Legos or the iPad while we clean house. My great hope is that it’ll be those trips to the endless waterfalls, writing his name on the beach, seeing all the creepy crawlies & fliers the woods can hold, or conquering a freaking mountain with his own legs.