Along with a few other lucky ladies, I was privileged to attend the Oregon Trails Summit in Bend last weekend. PNER sent me to talk trails, but I brought a lot of past experience as both a trail user and stakeholder (I worked on trails with Northwest Youth Corps for six summer seasons, as well as two seasons as a State Park Ranger). It was wonderful to network and discuss issues with nerds who speak my language, a complicated polyglot of passion, frustration and issues between Federal, State and private land managers, industry leaders, and coalition groups from every corner of the state. As a passionate dirt bag, equestrian, and overall outdoor geek, it was heady brew.

I also go to visit Smith Rock State Park for the first time!!!
Even with the fun and empowering discussions, presentations and emotional keynote speech to fill the weekend, there was a shadow cast over the whole thing for me. I’ll get to the specifics of the sessions I attended shortly, but I’d like to address what to me has become the elephant in the room: PNER is no longer the place for me.
This PNER trip to the Summit was spearheaded by Julie Serres, on behalf of the Trails Committee. She eventually chose not to come, for her own reasons born of frustration, and after seeing several back and forth comments through this member’s page, I am also choosing to bow out of paying dues next year to an organization that does not walk it’s talk of late. Oregon Equestrian Trails and Back-country Horseman’s Association both had a large presence at the summit, from leading a horse and bike workshop, having a small booth with handout materials, to being on several panel discussions. I feel PNER could have either been a larger presence, or gone with a clearer directive to “learn how we can give back to our beloved trails, and be more active in the trail maintenance community.” Without Julie there, it felt like our group lacked cohesion. 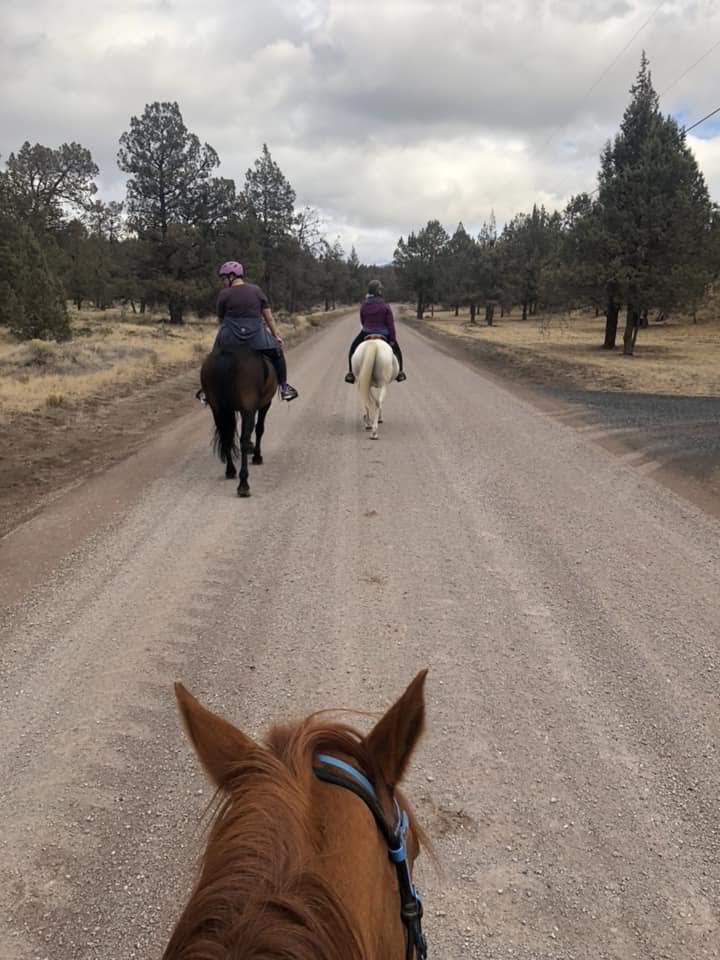 Also got to ride an awesome little war mare, Dalai Lama!
The first session I sat in on was regarding the new technology known as “e-bikes”, where I learned a great deal about what they actually are. The discussion was wide ranging, but boils down to what kind of experience e-bike users are looking for. Federal land managers have classed them with OHVs and other motorized vehicles, when most e-bikes are no louder or that much faster than non-motorized bikes. Oregon State has a more flexible, while still limited, interpretation for basic, pedal assisted e-bikes, the kind that have no throttle (you have to be pedaling to keep moving). For now, though, most e-bikes remain quite expensive, but as this market expands look to see more of them on the trails. From an equestrian’s perspective, the main worry is about speed on trails designed to allow bikes, whether motorized or non, to rapidly gain speed or pop out of nowhere, limiting reaction times for all parties. We covered built environment fixes (ie designing multi-use trails to slow all parties down through specific trail features), administration fixes (ie bikes only uphill, bikes and horses allowed on alternate days, etc), and simply building new, bike only trails while still maintaining equestrian and hiker access on existing trails (not a zero sum game; bikers get trails that cater to them, while equestrians don’t loose access to trails they’ve traditionally had access to.) 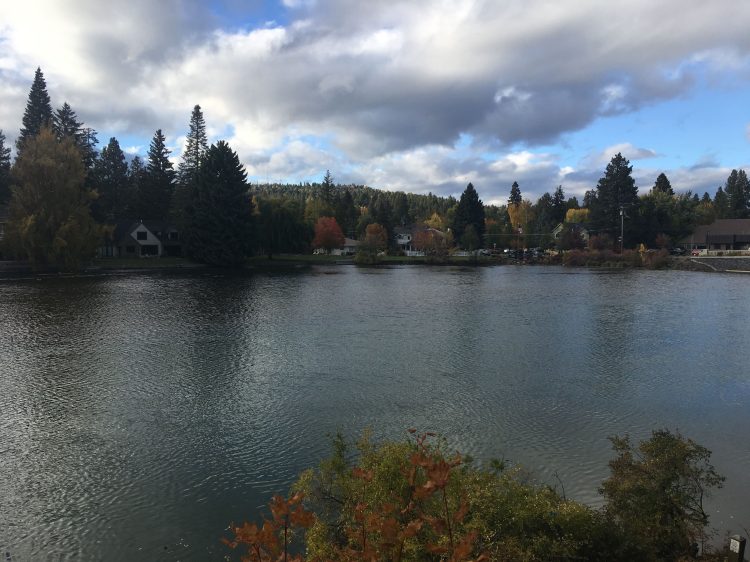 Downtown Bend is fantastic!
The next session was Forwarding Signature Trails (think like the PCT, only Oregon specific). As a trail user, this was a fun and hugely informative session as to the hard leg work and cooperation goes into building trails and trail systems. Presenters included groups from Umatilla, Tualatin, and Southern Oregon. I was heartened to hear that with the exception of the Tualatin River Trail (which is heavily urban and not a fun place to ride anyway) all trails in this discussion included equestrians in their design and build processes (I can’t decide which I’m more excited to visit and ride someday, the Jack-Ash trail in Southern Oregon or the Joseph network near the Wallowa’s!)
This session, along with the Regional Trails breakout, covered a ton of ground on how to gather support, funding, and everything else needed to make trails a reality. Ideas, tips and tricks ranged from encouraging participation of volunteers, communicating effectively with different demographics, and making local media your friend. One very cool tidbit as a technology loving Millennial was QR codes on business cards and trail signs, where you can pair your GPS track from your favorite local trail to a larger regional database. This helps map where and how people are using local trails, in order to include them in the area’s overall trail plan.
The most interesting breakout was one which certainly requires more time, Resolving Trail Conflicts. I know Elayne’s write up is already up (she’s faster than I am!) and she came into this session with a much different perspective. For myself, I lean more democratic and have a wide range of views on trail usage, as I’ve built trails for all types of users (OHVs, horses, bikes, hikers only, multi-use, ADA) and have used trails in all sorts of different ways, though my primary use is from horseback (c’mon, who doesn’t agree that’s the best view?) The overall point I took out of this session was considering each user group’s desired trail experience. For the most part, user groups can “make it work” in relative harmony, minus outliers who ruin things for everybody, regardless of how they use the trails. The main beef comes both between OHV users and other groups, mainly due to the noise and speed being so much greater than any other group (bikers, hikers, kayakers, equestrians, etc. while they each have their own impact on trails, and minus run ins with mountain bikes and *gasp* piles of poop, don’t really impact each other in a huge, insurmountable way).

So pretty…no desire to climb up like the two dozen climbers I passed!
Ultimately, it’s up to land managers to “build the table” and the responsibility of each user group to ensure they have a seat at that table, whether it be private, State or Federal lands in question. Ironing out issues of trail use, maintenance, new trails, emerging technologies and access take time, a buttload of patience, and empathy for other users, even if you hate what experience they might seek on trails. Each specialized organization, from PNER to Friends of the Columbia River Gorge, can help maintain access to trails for all through a combination of education, encouraging volunteers, and reaching out to bring user groups together; from poker rides that include hikers, bikers and equestrians at the same event to special sponsored trail signs, it is possible to share trails in a sustainable way. 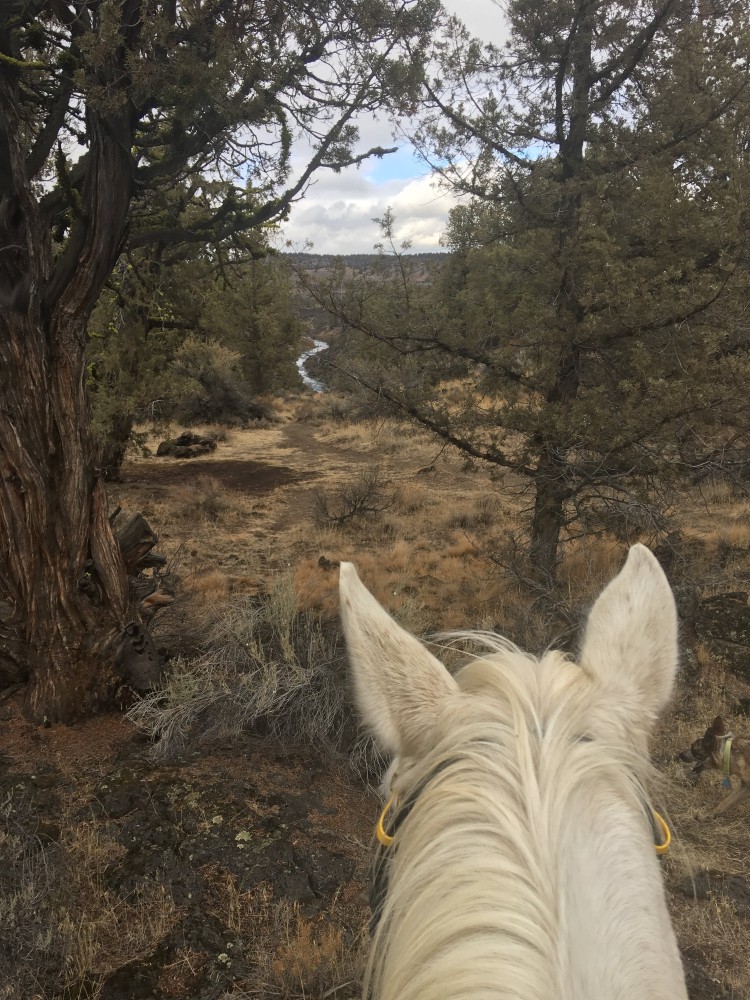 This mare was a hoot and I can’t wait to ride her again someday!
The biggest question, now that we’ve presented what we’ve learned, is where PNER will take this information. Each rider uses some combination of private, State and Federal trails (I myself ride mostly on private timber lands kept open to equestrians through the good faith of the landowner, as well as Federal and State forests and parks when someone takes a horse for me out and about). OET and BCHA both have large, well organized service arms; OET sponsors several fantastic horse camps through annual work parties, specialized signage, and organized fundraising rides; BCHA is out there hauling tools and equipment into back country trails, supporting other trail organizations by hauling equipment, providing equestrian based expertise, and both organizations spend a good amount of time on educating an increasingly horse naive public about horses, equestrian issues and best practices when meeting horses on trails.
Based on Julie’s experiences of the past year to get a Trails Committee off the ground, is PNER even willing to become more of a service or education based organization? It’s one thing to have a booth at an equine trade show asking people to join our organization; it’s a whole other kettle of fish to ask those who do join to organize an educational poker ride, put in hours maintaining their local trails, or designing educational materials for other trail users. 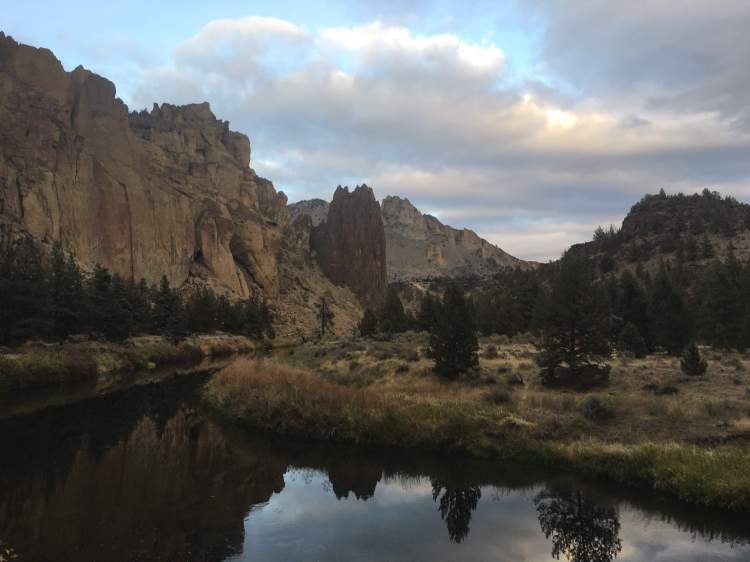 Definitely dragging the husband, kid and dog to this awful place someday…

One thought on “Oregon Trails Summit”